Honey Bee : 10 Benefits And Properties Of This Food

December 03, 2019
Alex
Honey has been used for centuries both in the kitchen and in the pharmacy, as a natural remedy. 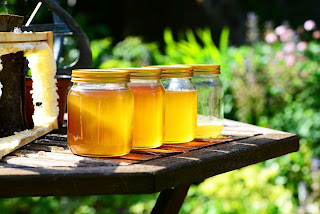 The properties and benefits of honey have been known and used by different societies over time. Currently, this substance is one of the most important primary natural sweeteners, whose benefits range from a pleasant taste to the palate, to the possible prevention and treatment of diseases.

Next, we will see what honey is and how it is obtained, and its main properties and benefits.

What is honey and how is it obtained?


Natural honey is produced naturally by Apis Mellifera and different subspecies of bees. The latter obtain honey by the nectar of the flowers and also by secretions released by the bees themselves.

Broadly speaking, honey is produced through a process of combining substances that bees transport, concentrate and store in honeycombs (a set of wax cells that they build to deposit honey). Subsequently, the honey is extracted through a process that includes unloading, lifting, uncoupling and finally separating the honey from the wax. All this occurs in a previously constituted space, and with specialized machinery and equipment.

Honey has a complex and nutrient-rich composition, which has been used for human consumption since most ancient societies.

The highest proportion of these nutrients is occupied by carbohydrates, such as fructose and glucose. It also contains enzymes, antioxidants, amino acids, vitamins, minerals, and organic acids, which make honey have many properties. In fact, it has not only been used as food but as an important therapeutic resource.

10 properties and benefits of honey


As we have seen, honey is one of the natural resources that has been most used by humans. Already from the classical texts of medicine, honey appears as an important resource to treat wounds, pains, and diseases.

Currently, beekeeping (bee breeding to take advantage of its products) is one of the most important economic activities in different countries. The latter is due to the richness of its nutritional properties and its healing potential. We will see below what are the most important properties of honey.


Due to the inhibins (hydrogen peroxide, flavonoids, and phenolic acids) present in honey, this substance has important properties as a bactericide. These properties are also attributed to the presence of glucose oxidase. For example, one of honey's antibacterial potentials may be important for acne treatment and for exfoliating the skin.


Antioxidants are natural substances that prevent the formation of oxides, which in turn slows cell breakdown. In this sense, the periodic consumption of honey can be an important dietary supplement in the prevention of heart disease, the immune system, and inflammatory processes.


Before the extraction of cane sugar and other roots, tubers and foods became popular, honey was the only natural primary sweetener. Because of its components, such as small peptides, flavonoids, and enzymes, honey serves as a sweetener, but not only that. It is a protective agent that, when mixed with other foods, can enhance both the taste and its beneficial properties for health. In this same sense, honey can be used as a natural substitute for refined sugar.


Bee honey contains approximately enzymes and amino acids. These originate from the activity of the bees themselves, and sometimes in the nectar of the plant. Proteins play a fundamental role in the growth and synthesis of different tissues. In turn, amino acids are the basis for protein production.


The high moisture concentration of honey not only influences its viscosity, weight, flavor, and color, but it can be essential to moisturize different parts of our body. For this reason, it is usually used as a hair and scalp moisturizer. In this, it is important that honey is not exposed to high temperatures since its properties can be lost.


When combined with other natural products, such as lemon juice or cinnamon, honey can favor the activity of the digestive system. This means that it helps metabolize food, preventing or relieving stomach indigestion. It has also been attributed to relieving symptoms of constipation and a feeling of heaviness after strong meals. For this reason, it has also been attributed to the property of preventing reflux and helping to relieve diarrhea.


Already from ancient Egyptian, Chinese and Roman societies, honey was used to treat different wounds. In combination with other herbs, a honey ointment was beneficial for sunburn, wound infections and facial blemishes. For this reason, antiseptic properties are attributed to it, that is, it reduces the possibility of infections when applied to live tissue in some wounds.


Again when combined with other substances such as lime or lemon juice, honey relieves a sore throat, even in small doses. Due to the antibacterial properties, they could also help fight some infections of this type. Likewise, honey is recognized as a natural cough remedy (however it is recommended not to apply in children under one year of age).


The direct application of honey in inflamed muscles has been used as a powerful anti-inflammatory, that is, it has been attributed to the property of reducing muscle swelling. In turn, this relieves pain caused by the same inflammation.


Ayurvedic medicine, traditional from India, has attributed revitalizing properties to honey, which in turn relieve weakness or excessive tiredness. It has also been attributed to a relaxing property that favors sleep and some symptoms of stress. It is also used for tooth pain, especially in children older than one year, in the treatment of asthma and hiccups. It is also used to moderate blood pressure levels.
by Alex at December 03, 2019